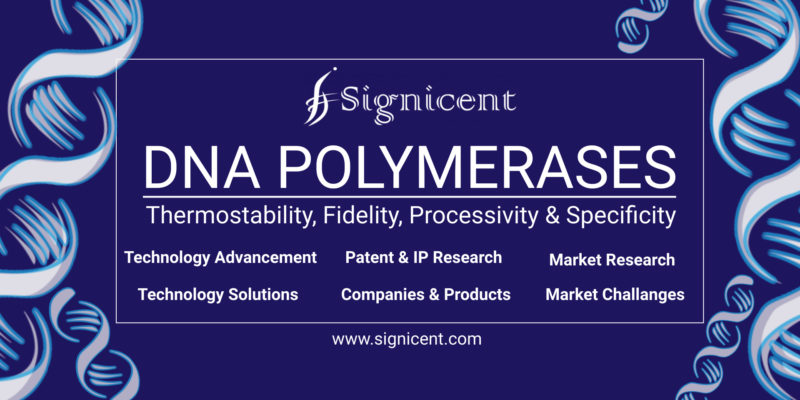 This DNA Polymerase Report demonstrates the factors affecting the process and the final product. Fine solutions technological innovations have helped in boosting the market for DNA Polymerase.

DNA polymerases play a pivotal role in DNA replication and repair. It catalyzes the stepwise addition of deoxyribonucleotides to a growing DNA chain. In 1956, Arthur Kornberg and his colleagues discovered Pol I by using Escherichia coli (E. coli) extracts to develop a DNA synthesis assay. DNA polymerase is the primary enzyme that catalyzes the linking of the 3′ hydroxyl group of the end nucleotide to the 5′ phosphate of nucleotide to be added.

The application of DNA polymerases is widely used in the area of research and diagnostics for the amplification of genetic materials. And the process is called PCR ”Polymerase Chain Reaction”. There are certain factors about the polymerases (stability, processivity, and more ) affecting the process and the final product.

There is a huge potential for the growth of the DNA polymerase market with the increasing incidence of cancer, neurological disorders, microbial infections, genetic mutation, chronic diseases.

Domain swapping or addition of domains from other enzymes to incorporate new activity or function. Targeted mutations are often knowledge-based and rely on previous studies for how to achieve the desired effect. Random mutagenesis by making mutations in a less targeted fashion, often through error-prone PCR or the use of random primers. Screening or selection to identify the desired functionality obtained by directed evolution and compartmentalized-self replication (CSR). Fusion of DNA polymerases with proteins, which naturally bind to single- or double-stranded DNA. Chimeric DNA polymerases are proteins whose amino acid sequence consists of sequences from at least two separate proteins.

Thermostability: Thermostability of these enzymes poses a challenge when high temperatures are used or kept for prolonged incubation periods. The amplification reaction stops there and then when temp. crosses 90°C.

Fidelity: The ability of DNA polymerases to accurately replicate DNA sequences is crucial in various applications. The misincorporation of nucleotides causes mutations & leads to diseases like cancer.

The processivity of an enzyme is defined as the number of nucleotides being processed in a single binding event. DNA polymerase’s processivity often reflects synthesis rate and speed, as well as an affinity for its substrates.

Specificity: Nonspecific amplification is one of the major hurdles in PCR. The yield and sensitivity of target amplification due to synthesis of undesirable products.

How Thermostability Is a Roadblock

Effect of high temperatures– Due to the inherent nature of the thermophilic enzymes sourced from areas such as Yellowstone Park, where thermophiles are found, these enzymes although can sustain high temperatures, however cant function well above the optimal temp. such as 90°C.

How to Overcome The Issue of Thermostability

Identifying cold-sensitive thermostable DNA polymerases that are inactive at ambient temperature by methods such as  Point mutation or substitution.

Thermostabillization using HSP proteins has proved to be an amazing solution. A combination of chaperones from a hyperthermophilic Archaeon with polymerase is used. Research done by Frank T. Robb, unveils the use of heat shock proteins of Pyrococcus furiosus (sHSP). It helps to confer thermotolerance, effective to combat enzymatic aggregation and intracellular precipitation during heat stress. And thereby enable enhancement of the utility and stability of Taq polymerase in polymerase chain reaction (PCR) applications.

Challenges Due To Fidelity

MMR defects – Proofreading and mismatch repair (MMR) together maintain high-fidelity DNA replication. However, defect in this property elevates the overall mutation rate and are often associated with increased cancer incidence.

How Innovation is Helping To Solve Fidelity

The innovation in Site saturation mutagenesis (SSM) is in its concept. It will substitute single codons or a set of codons with all possible amino acids at the position. They identified two different KlenTaq DNA polymerase variants that exhibit increased mismatch extension discrimination using the method.

How Processivity Is a Problem

The presence of PCR inhibitors such as heparin, xylan, and humic acid, causes the inhibition of the processivity of polymerase. These are found in blood and plant tissues.

High-fidelity DNA polymerases tend to display low processivity due to their strong exonuclease activity. This further slows down the polymerization.

Technological Solutions To Overcome the Problem of Processivity

By fusing enzymes with proteins where attachment of DNA-binding proteins enhances the inhibitor tolerance of chimeric polymerases, processivity can increase up to 3-fold.

DNA polymerases when engineered with a strong DNA-binding domain of another protein show processivity that is enhanced 2- to 5-fold.

Fusion between DNA-binding proteins  & the enzyme. The reference discloses the method of fusing enzymes with proteins where attachment of DNA-binding proteins enhanced the inhibitor tolerance of chimeric polymerases in loop-mediated isothermal amplification to several of the most common DNA sample contaminants—urea and whole blood, heparin, EDTA, NaCl, ethanol. & the processivity was increased up to 3-fold.

During the mixing of different reaction components, DNA polymerases often extend misprimed targets and primer-dimers or even multimers resulting in a series of non-specific products.

Prevention of DNA multimerization can be achieved using modified oligonucleotide primers with bulky groups which further interfere with the moving of polymerase along DNA chains.

Increasing activity of DNA polymerases with increased genetic mutation specificity caused by a mutation on a specific amino acid site.

The reference discloses PCR buffer composition for increasing activity of DNA polymerases with increased genetic mutation specificity caused by a mutation on a specific amino acid site in which the 660th amino acid residue arginine (R) is substituted with valine (V). The innovation is in Single-nucleotide polymorphisms (SNPs).

DNA polymerase Market Size is expected to exceed more than 389 Million by 2024. It is showing a compound annual growth rate (CAGR) of 7%.