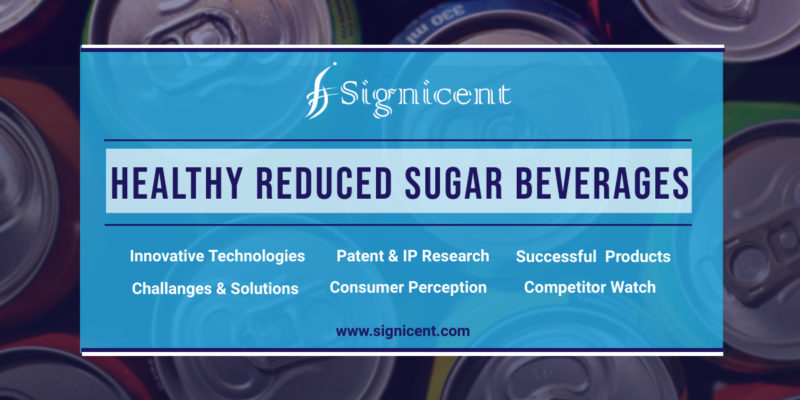 The report will shed light on the challenges, innovations, research, patents, and products associated with Reduced or No Sugar Beverages, Juices, or drinks.

The escalating prevalence of diabetes and obesity are pushing consumers from sugar to sugar-free alternatives. Burgeoning consciousness for health and wellness globally has been driving accelerated changes in the food and beverage industry. When it comes to ranking beverages best for our health, sugary drinks fall at the bottom of the list because of so many calories and virtually no other nutrients.

Even WHO recommends that a reduced intake of free sugars must be practiced. For example, in adults and children, intake of free sugar should be less than 10% of total energy intake. (Source: WHO). It is therefore estimated that the global sugar-free food and beverage market is projected to grow at a CAGR of 9.36% from 2021- 2026.

Reduced sugar beverages have seen high growth in the past but their sales have declined sharply. The reasons behind the sales drop can be concluded as

Taste: Zero or less sugar beverage has High-potency sweeteners which have very characteristic after tastes, such as bitterness and astringency.

Texture: Due to reduction or elimination of sucrose, the viscosity of the beverage is affected. Therefore, it becomes challenging for achieving a particular texture.

Cost: Polydextrose is used as sugar substitutes. But it adds to the cost of the beverage.

Health Issues: It is observed that sugar-free soft drinks have been associated with dental erosion. Daily consumption of two or more diet soft drinks, comprising artificially sweeteners increases the risk of heart disease and stroke.

This report will take you through the industrial challenges, failure in creating a repeat purchase from customers. Additionally, we assessed customers’ perception & acceptance of Zero or Reduced Sugar Beverages.

Contact Signicent to find the core technical reasons and solutions for the success of few drinks with reduced sugar content.

PEPSICO attempted to sell an all-new recipe for Diet Pepsi. In 2015, they announced to replace aspartame from Diet Pepsi and replaced it with artificial sweetener sucralose. It was not welcomed because PepsiCo replaced aspartame with a new sweetener: sucralose: better known by its brand name Splenda.

Pepsi observed that in the first quarter aspartame-free diet soda sales decrease almost by 11 percent. They also received consumer feedback that indicated aspartame-free sodas weren’t quite as tasty as the original recipe.

“Coke Zero Sugar” is part of Coca-Cola’s commitment to reducing sugar, with the company recently signing up to an industry-wide pledge to reduce sugar by 20% across its portfolio of sales by 2025.

3.5 million Australians had drunk “Coke Zero Sugar” since its launch. And the product was helping grow the low- and no-sugar drinks category.

Coca-Cola Amatil has reported a 34 percent uplift in full-year profit. The earnings before interest and tax increased by 0.8 percent to $639.3 million. While net profit after tax lifted 1.4 percent to $393.9 million.

The major reason: The taste of the product is an important parameter as “Coca-Cola zero Sugar” was carefully crafted to taste even more like Coca-Cola Classic but without the sugar.

The development in soft drinks to acknowledge the rising health concerns among the consumers is driving the growth of Australian soft drinks market.

Advancements such as sugar-free soft drinks, quality check labels, including fruit pulps in the drinks, and others have increased consumer spending on soft drinks