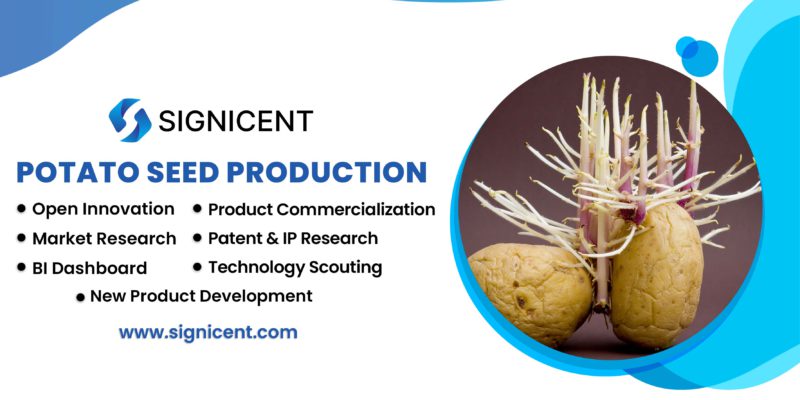 The objective of the seed production report is to identify various methods and technology for producing “Potato Seed”. Evaluation and identification of improved high-yielding potato varieties according to consumer preferences and user groups have been discussed. The seed production report helps in the identification of sustainable agronomic practices and profitable potato-based cropping systems.

A seed potato isn’t actually a seed; they’re tubers that you can use to grow new potatoes. It will be genetically identical to the parent potato. It’s the usual way that potatoes are made available to farmers and growers although it is possible to produce potato seeds (also known as True Potato Seed, TPS).

Potatoes do best in full sun. They can be planted in the early spring two to four weeks prior to the expected last frost date in your area. Seed potatoes planted in soil that is too cold or soggy may rot. Potatoes are aggressively rooting plants and will produce the best crop when planted in light, loose, well-drained soil. Potatoes prefer slightly acid soil with a pH of 5.0 to 7.0—acidic to neutral.

In this potato seed production report following areas have been comprehensively discussed:

Most potato cultivars or tubers contain large amounts of asparagine, a non-essential free amino acid. It rapidly gets oxidized to form acrylamide, a carcinogenic product upon frying. Also, some are susceptible to late blight, a devastating disease.

Most of the potato cultivar/tubers contain large amounts of asparagine, a non-essential free amino acid that is rapidly oxidized to form acrylamide, a carcinogenic product upon frying. While some are susceptible to late blight, a devastating disease.

The 3G seed strategy relies on producing a large no of mini-tubers through one generation of a very rapid multiplication technology (RTMs), allowing bulking of sufficient seeds in only two field generations rather than conventional four to six.

The main RTM method is Aeroponics, which achieves a multiplication rate over 50:1 compared with the normal of 5:1. Aeroponics involves producing mini tubers from in-vitro cuttings in a total enclosed darkened box into which water and nutrients are sprayed as a mist. Minitubers are harvested from suspended roots.

CIP has adapted this technology in Peru to lower its cost by reducing the cost of components and saving on water and energy. 11 Aeroponics Units have been established and produced 1.4 million mini-tubers in Kenya alone.

Analysis showed that mini-tubes in Aeroponics can be produced for about 20-50%of the cost of mini-tubes via conventional pot production systems.

New technologies and superior varieties production are the growth drivers for the potato market. However, lack of access and awareness in emerging markets causes restrain.

The growing demand for potatoes as a vegetable along with the purpose of snacks is the door for new opportunities. But insufficient availability and the high cost of certified seed potatoes is a big challenges to overcome.

APAC (Asia-Pacific) is estimated to be the fastest-growing market for potato seed production. Increasing government initiatives in the emerging, potato chain partners have built up a very strong sector over the past century and together they control the cultivation, breeding, trade, processing, and infrastructure are driving the market in APAC.

ABILENE RUSSET is a medium late, high yielding potato variety with cream-white flesh color. Due to the long oval tuber shape and the perfect internal structure it has very good suitability for processing French Fries for the Fast food sector. The following features make it perfect

AUSTIN is an early to medium early processing potato that has excellent suitability for the production of crisps. The low content of reducing sugars makes it perfect for long-term storage. The following features make it perfect

Bengaluru-based CropIn Technology Solutions,(India) an agritech startup that provides software as a service (SaaS) solutions to agribusinesses globally, has partnered with Punjab Agri Export Corporation (PAGREXCO), a government of Punjab enterprise. It will improve the quality of potato seed production in the state. Under the partnership, PAGREXCO will use CropIn’s artificial intelligence (AI)-powered technology to improve the quality of potato seed and incorporate a first-of-its-kind seed potato traceability in the entire value chain, CropIn said in a joint statement.

South Korean biotech company, E Green Global (EGG), has raised US$9.2 million in a funding round from a venture capital fund, YD-SK-KDB.

EGG also claims that it has achieved the world’s first-ever success in commercializing Micro tuber Technology (MCT), which increases the production capacity and sustainability of seed potatoes.

Potato Technology Centre, (PTC) Shamgarh, India in collaboration with Central Potato Research Institute (CPRI) in Shimla (India) and International Potato Centre (CIP), Peru, has started producing potato seeds in the air with the help of aeroponic technique. there is no need for soil and other growing media, potato seeds are grown in a moist environment. They claim potato seeds grown through this technology are free from soil-borne diseases.

It is essential to understand the future of the industry before making any investment. Therefore the potato seed production report hereby discusses the future. A team from the Federal Research Center for Biotechnology of the Russian Academy of Sciences rose to the challenge and presented the first pre-production prototype of a vertical farm. The prototype was developed in the framework of the “Smart City Farm” project initiated by the World-class Scientific Center “Agro-technologies for the Future which was opened in 2020.

The vertical farm consists of module stands with automated watering and multichannel LED lighting systems, as well as a set of microclimate and substrate sensors. Currently, the team is developing databases and analyzes the effect of adjustable lighting on various crops at different stages: from in vitro to nursery plants and final products.

Another important feature of the vertical farm and the controlled vegetation technology developed for its flexibility and universal nature. The system can be easily changed to fit a particular task. The team has already received the first commercial orders from major agricultural producers and potato processing companies. In the future, the scientists plan to develop a technology for controlled vegetation of essential-oil-bearing plants and vegetables, such as tomatoes and peppers.