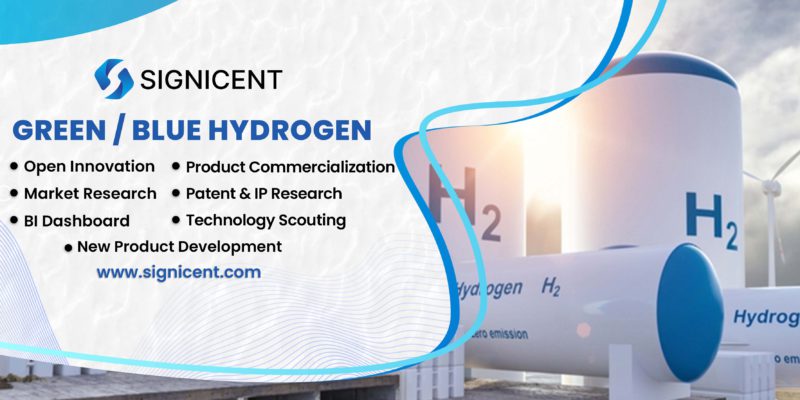 Green/ Blue Hydrogen Report: What innovations will drive the market?

Green hydrogen is a key component of the energy equation and hydrogen is recognized as a primary resource of potential energy. Water electrolysis is used to produce green hydrogen using regenerative energy sources. Hydrogen is a low contamination gas for the atmosphere that can be stored and transformed into heat or energy according to the need. Since hydrogen can be produced using solar energy, it is one of the most prominent circular carbon economy (CCE) strategies.

Blue Hydrogen is likely in high demand as developed nations are investing in an eco-friendly alternative for a cleaner energy source. This is because of the eroding air quality brought on by human activities, including the burning of fossil fuels. This eventually causes a spike in global temperature. Steam Methane Reforming (SMR), Autothermal Reforming, Partial Oxidation, etc. are some of the methods associated with the manufacturing of blue hydrogen.

While analyzing the different aspects of green and blue hydrogen, the experts of Signicent found some of the challenges associated with the production, storage, and transportation of green/ blue hydrogen.

This section of the report will talk about emerging innovations in hydrogen production, storage, and transportation. The following innovations seem to overcome the challenges discussed above.

CLR process is a chemical looping reforming process used to produce green and blue hydrogen. The Institute of Carbochemistry (ICB-CSIC) in Spain has developed a CLR process using reactive and durable Cu-based oxygen carriers. These Cu-based oxygen carriers are a possible substitute for Ni-based materials for the production of hydrogen gas. During the process, the temperature variations affect the hydrogen yield. At an extreme temperature of 900ºC, methane (CH4) conversion reaches 88% while H2 yielded 2.20 mol. With temperature reduction, H2 & CO seem to decrease because of lesser methane conversion. In the CLR process, neither net input of heat is required, nor an excess of heat is recovered.

DSM (Netherlands) modifies the design of hydrogen tanks. A polymer-based hydrogen fuel storage tank has been created by them using the blow molding technique with a pinch step to make a pinch seamline. With these modifications, the storage tank offers better mechanical and integrity performance during an impact. It has been observed that containers with heat stabilizers embedded in them produced good results and did not break during the test. These modified containers offer various advantages including corrosion resistance, more flexibility in design, reduced noise attenuation, low permeability, etc.

Japan’s Tottori Industrial Technology Center has invented stainless steel that is resistant to chemicals and has hydrogen embrittlement property, making it a possible replacement for current metallic materials. The sample in the SSRT test provides values of 0.93 and 0.84, which must be higher than 0.8. As a result, sample with values higher than 0.8 exhibits good resistance to hydrogen brittleness. Even after 528 hours of neutral salt being sprayed on the surface of the embodiment, no rust is produced, proving its remarkable corrosion resistance. At a 400 kPa differential pressure, high temperature (>300 °C) hydrogen is passed which shows the strong barrier properties of material towards pressure and temperature.

This section of the Green/ Blue Hydrogen report will cover all the market trends including startups, acquisitions, market size, and key players working significantly on green and blue hydrogen. These insights are very useful in business to build a strategy and strengthen its position in the market.

Fortescue Future Industries (FFI) is an Australia-based company founded in 2020. FFI is fueling the global energy transition by building a strong portfolio of renewable energy and green hydrogen projects. Sparc Technologies Limited is a South Australian company founded in 1999. It focuses on the development of innovative technology solutions.

According to the research and analysis, the leading players working in the production, storage, and transportation of hydrogen gas are listed below: