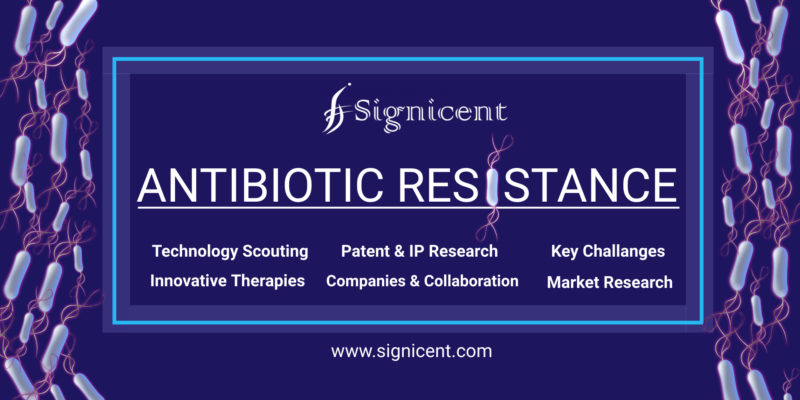 The objective of the study is to explore the emerging, novel, and innovative trends in the field of “Antimicrobial Resistance & Therapeutics”. The study will include various therapies that have been developed to combat Antimicrobial Resistance. The commercialization aspects such as Products, Existing companies, Startups are also discussed.

The technology research report for therapeutics will shed light on the advancing and innovative technologies that are shaping up the industry.

Lactobacillus and Bifidobacterium have been used for the treatment of various gastrointestinal infections, the potency of the yeast Saccharomyces boulardii, and of nonpathogenic strains of E. coli and Bacillus spp., has also been explored.

These peptides are facially amphiphilic and their cationic domain engages in electrostatic interactions with the negatively charged bacterial cell surface, while the hydrophobic domain interacts with the lipids of the bacterial membrane.

This technology includes the introduction of the microbiome from a healthy donor to a diseased gut.

Temperate phages were used to deliver the CRISPR-Cas system into the genome of antibiotic-resistant bacteria.

Lysins can be engineered to kill several pathogens including Gram-negative bacteria. These enzymes have attractive features that they do not activate an adverse immune response and a raise of resistance is very unlikely.

The phase III clinical program for gepotidacin in adults and adolescents comprises the following two studies:

Urogenital gonorrhoea study: The EAGLE-1 study will compare the efficacy and safety of gepotidacin (3000mg administered orally at the study site followed by self-administration of a second oral 3000mg dose as an outpatient 6 to 12 hours after the first dose) to a single intramuscular 500mg dose of ceftriaxone plus a single oral 1g dose of azithromycin in approximately 600 patients with uncomplicated GC caused by the bacterium NG. The study duration is approximately 21 days. The primary endpoint will be the culture-confirmed bacterial eradication of NG from the urogenital body site at the Test-of-Cure (TOC) visit.

Uncomplicated urinary tract infection study : The EAGLE-2 study will compare the efficacy and safety of gepotidacin (1500mg administered orally twice daily for 5 days) to nitrofurantoin (100mg administered orally twice daily for 5 days) in approximately 1,200 adolescent and adult female patients with uUTI.  The study duration is approximately 28 days. The primary endpoint will be the therapeutic response at the TOC visit in patients with qualifying uropathogens.

The Antimicrobial Peptides (AMP’s) is one of the promising therapies but it leads to cellular toxicity and is usually specific towards a single type of microbe.

The AMP’s with the broad antimicrobial spectrum should be synthesized which can be done by making the modification the basic structure of the peptides and reducing the cellular toxicity.

Inducing self-assembling properties in cationic peptides and influence their interaction with bacterial membranes and consequently their antimicrobial and broad-spectrum activity.