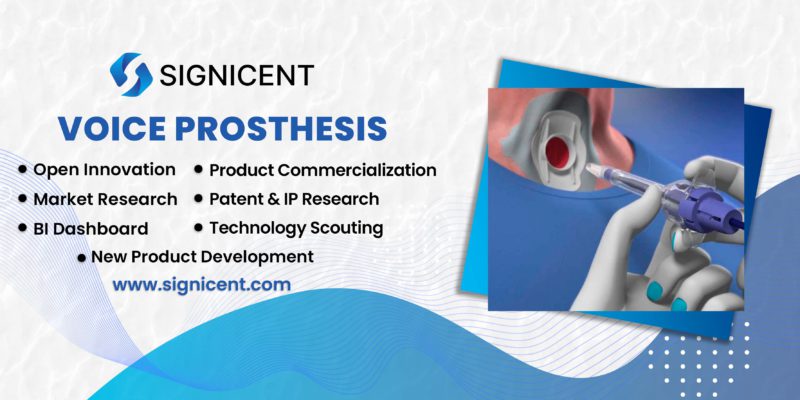 In this section of the voice prosthesis report, the challenges and difficulties associated with traditional methods of voice prosthesis have been discussed to better understand the innovations in technology.

The known methods and devices are the presence of difficult steps to perform, in which the safety of installing the sleeve into the opening of the flexible wall is reduced, and the probability of damage to the flexible wall increases. The tracheal/proximal voice prosthesis anchor may partially open prematurely between the lobes of the loading tube, causing the entire prosthesis to be trapped in the esophagus.

Reduction in the Trauma of Adjacent Tissues

In this section of the voice prosthesis report, a specialized device known for reducing the trauma of tissues has been talked about. Grigory Solomonovich Margolin has developed a method for installing a voice prosthesis into an opening in the tracheoesophageal wall in a tracheostomy after a larynx removal surgery and a device for its implementation. The inventions provide a reduction in the trauma of adjacent tissues, simplification, and acceleration of the process of installing a prosthesis.

In this section of the voice prosthesis report, a hollow cylindrical body made with the possibility of placing a voice prosthesis has been briefly discussed. It is intended for installation in an opening in the tracheoesophageal wall. A rod is placed inside the body with the possibility of longitudinal movement. The method consists in using a voice prosthesis in the form of a sleeve, equipped from the ends with flexible radially located clamps that form a coil. The flexible clamps of the prosthesis can elastically fold towards the axis housing and unfold when installing the prosthesis in the hole in the tracheoesophageal wall, one fixator on each side of the hole.

The available treatment options for voiceless patients are limited. A number of difficulties are associated with speech recognition using measurements of the vocal tract, larynx, neck, and facial muscles with lip and facial movements. The present invention is primarily concerned with severe structural dysphonia and aphonia, but its applications are not limited to these conditions.

To fix aphonia several innovations are happening across the globe, one such innovation has been touched upon in this section of the voice prosthesis report. Rudolf Murai von Bünau has developed a machine. The goal of the techniques described here is to restore natural-sounding speech in real-time to patients who have impaired or absent phonation but who have retained at least a partial ability to articulate.

A corresponding method involves training a machine learning algorithm on the basis of initially one or more reference audio signals. The techniques described here, the time-varying filter function of the patient, i. H. the articulation, to a source function, d. H. Phonation, which is based on the voice output of one or more healthy speakers, is computationally “transplanted” in order to synthesize natural-sounding speech in real-time.

Larimed“ invented breathing filter for tracheostoma protection. The utility model relates to the field of medicine, in particular to a device for protecting a tracheostomy in patients undergoing laryngectomy and/or tracheostomy.

The aforementioned gasket located in the opening of the housing between the safety element and the heat and moisture exchange filtering element does not allow the specified heat and moisture exchange filtering element to come into contact with the safety element, thereby additionally protecting it from the ingress of mucous secretions.

Based on the functions of the safety element and the gasket described, a suitable material for these elements is a rigid material, including the aforementioned plastic.

An electronic larynx (electrolarynx), is a battery-operated machine that produces sound for you to create a voice. There are many different makes and types, mostly these are usually about the size of a small electric razor.

Oncodisc founded in 2018 is known for making an intelligent implantable vascular access device. It is embedded with advanced sensor and communication technology. In addition to the delivery of pharmaceutical therapy, the device reliably and accurately monitors patient physiology for early detection of illness or treatment-related complications.