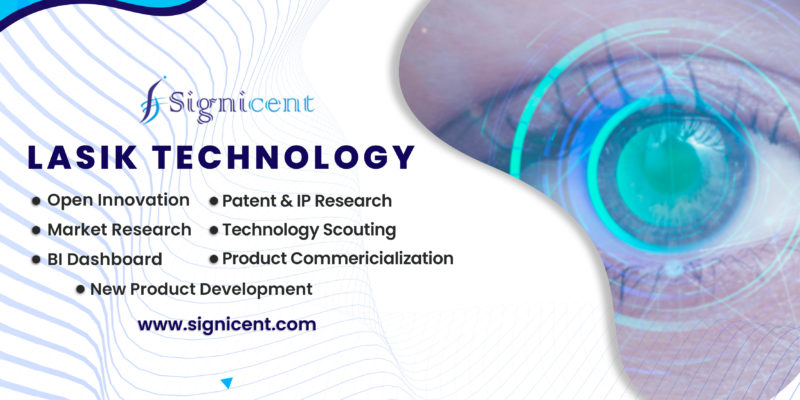 In this section of the LASIK technology report, the innovations that are aiding in eye surgical laser and treatment devices have been briefly discussed.

At present, the devices and methods for controlling a photo ablative ophthalmologic laser cause the evaporation of the entire volume body. This requires relatively long treatment times, on the one hand, a relatively high energy input by the laser into the cornea also gets affected. In particular, the latter can result in complications in the removal of the predetermined volume body of the cornea.

The laser is controlled such that the predefined pattern is at least partially circularly and/or spirally ablated. The start of the photo disruption can be affected by the individual laser pulses in the center of the respective interface or also at the edge of the respective interface. The predefined pattern is defined based on one or more control datasets, wherein the control dataset or datasets include control data for positioning and/or for focusing individual laser pulses in the cornea.

Highly invasive eye surgeries create huge openings which can cause many complications including leaks, infections, hypotony (e.g. low eye pressure) and require post-operative, long-term monitoring to avoid late complications. In minimally invasive laser surgeries the surgeon may have some view of the target but have to rely on external light sources.

The laser probe of the present invention is particularly well suited for a laser trabeculostomy procedure so that the surgeon has a clear field of view within the eye, particularly of the anterior chamber angle where the cornea and the iris meet so that the position of the laser relative to the trabecular meshwork can be clearly visualized.

The laser probe includes a fiber optic core and an illumination member for transmitting laser energy and providing illumination in a field of view proximate to the delivery tip of the fiber core respectively.

There is an ongoing need for new and improved techniques and materials, and refractive corrector vision components resulting therefrom, for improving human vision. Current LASIK corneal treatments cannot create sharp edges as they are both formed with larger laser spot sizes and then have the cornea and/or epithelium healing over the surface ablations and flaps, thereby causing a change in the resulting corneal correction.

The laser-induced refractive index changes by focused femtosecond laser pulses in optical polymeric materials or optical tissues are performed to address various types of vision correction. Improving binocular visual performance in a presbyopia patient, comprising: modifying the refractive index of ocular tissue of an eye of the patient, by irradiating select regions of the ocular tissue with a focused, visible, or near-IR laser below the optical breakdown threshold of the tissue to provide refractive structures that exhibit a change in refractive index.

Signicent consistently track changes in the innovations and market in LASIK technology. Our experience and understanding of the area can help better R&D, help solve the bottleneck, find suppliers and understand the state of art search.

In this section of the LASIK technology report, the transforming companies are enlisted to understand the market dynamics.

LASIK technology report also has information about market trends, market dynamics, and market segmentation. The market has been divided into various segments based on

By type, LASIK instruments form the largest and fastest-growing product segment in this market. The growth of this segment is primarily driven by the rising incidence of HAIs, the increasing number of surgeries performed, stringent regulatory mandates for infection control, and the growth in the medical device and Medical industries.

Asia-Pacific is expected to grow at the fastest CAGR during the forecast period. The factors driving the growth of the Asia-Pacific market are accelerated economic growth, growing government focus on the healthcare sector.

Emerging economies such as India, China, Brazil, Russia, and countries in Latin America and Southeast Asia are expected to provide significant growth opportunities to players operating in the Eyecare equipment market. Over half the world’s population resides in India and China, making these markets home to a large patient population.